It all started down there in Australia in the 60’s when Rugby union players would play TOUCH to warm up for matches. They’d focus on touching any part of the body of opposing team players without the tackling play that’s a characteristic of the games proper. The aim, of course, was to cut the odds of getting each other injured during training.

With time, this new form of playing the game (Rugby) caught on with fans and had evolved into what we know today as the Touch Rugby.

In the southern hemisphere, Touch Rugby has a huge following and places like Brisbane in Australia and New Zealand acting as a sort of hub for Touch players. In fact, there are over 300, 000 people in New Zealand playing the game of Touch today.

Over here in the UK, the game is gaining traction with over 15,000 adults in London, Glasgow, the Midlands, Newcastle, and Cardiff identifying themselves as Touch players.

And in the United States, the game of Touch is going mainstream with the USA Touch Association organizing yearly national championship.

Touch Rugby has, in reality, become a sport in its own right with an International body, the Federation of International Touch (FIT), overseeing the development of the game globally, and even organizing world cup tournaments.

So, what exactly is Touch Rugby? 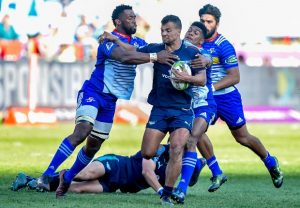 The minimal contact nature of the game means, it can be played by everyone, from old to young, men and female. It’s a lot more like a social event with friends and family making up the team than being competitive; however, one can also play competitively in the several Touch leagues around.

The game emphasizes running agility and ball-handling skills like catching and passing which is an excellent way of burning tons of calories and keeping fit.

Touch is a fun simple – easy to learn, easy to play – sport that is suitable for both experienced and newbie players.

The game can also be played by both men and women together in the same team or against each other and is a great way to meet new people.

Touch does not require too much equipment to play; just get a rugby ball, a group of people willing to play, an open space – it can be played indoors or outdoors – and you’re set. Again unlike Rugby union matches that require 15-a side, Touch can be played with just 5-a side.

Organizations can use a game of Touch to break in new staff into their team, foster team spirit, cooperation, and collaboration among employees and since it doesn’t require any unique skill set, everyone can participate in it.

Since Touch is a minimal contact sport, it’s almost impossible to get injured while playing; hence a good sport for those scared of the brute power of traditional rugby games.

Finally, Touch is an appropriate warm-up routine before games.